The TaPRA Executive Committee is delighted to announce the appointment of its new Chairs-Elect.

Broderick Chow (Reader, Royal Central School of Speech and Drama), Rachel Hann (Senior Lecturer, Northumbria University), and Royona Mitra (Professor, Brunel University London) will begin their tenure as Chairs immediately following TaPRA’s Annual General Meeting, which will be held during the annual conference (12–14 September 2022). Professor Roberta Mock (Executive Dean, Royal Holloway, University of London) will remain Chair of TaPRA until then, at which point she will become a member of the Executive Committee in the role of Immediate Past Chair for the period of one year.

Broderick, Rachel and Royona were nominated together for the role of Chair. They were the only nomination received by the Executive Committee, which then voted unanimously to confirm their appointment as Chairs without membership ballot.

No nominations were received for the roles of Vice-Chair or Conference Officer. The TaPRA Executive is working with the Chairs-Elect to decide how best to move forward within this context, as well as the succession more generally.

The TaPRA Executive Committee wishes to express its excitement – for both TaPRA and the theatre and performance research community more broadly in the UK and internationally – at this fresh approach to leadership by long-standing TaPRA members and experienced scholars. We are looking forward to the organisation’s evolution during its next chapter.

You can read the Chairs-Elect’s introductory statement below, which has been lightly adapted from their nomination statement. 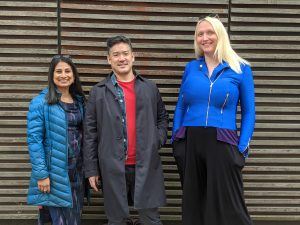 We do so to demonstrate that leadership is a coalitional act.

We represent positionalities historically underrepresented in the field.

We take seriously the cultural value and relevance of theatre, performance and dance research.

We bring to the organisation our senior managerial expertise as Director of Learning, Teaching and Inclusion (2020–current), Deputy Associate Dean of Surrey Doctoral College (2017–2020), and Associate Dean of Equality and Diversity (2020–2021) respectively.

Interdisciplinarity is foundational to all our work. As scholars, we contribute to the fields of theatre studies, performance studies, sports studies, and dance studies in conversation with scenography and design, cultural geography, gender studies, race and decoloniality. Between us we bring shared expertise on the current landscape of theatre and performance research as members of the AHRC Peer Review College and REF2021 Sub-Panel 33 membership. Collectively, we are co-founding members of the Revolution or Nothing Network and the Antiracism at Work in Theatre, Dance and Performance Collective.

We have each been a member of TaPRA for over a decade and in that time have convened and presented at Documenting Performance, Directing & Dramaturgy, History & Historiography, Theatre, Performance and Philosophy, Scenography, Popular Performance, Performance & New Technologies, and Bodies & Performance Working Groups. Between us we have also served on the TaPRA Executive Committee as Research Officer, PGR Representative, and Communications Officer.

As Chairs we commit to:

Fostering the growth and sustenance of the TaPRA community

Steering TaPRA through the pandemic and beyond

Foster and consolidate closer and meaningful links with SCUDD and DanceHE