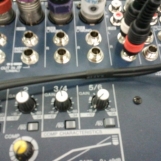 Dear All, Just to let you know that the submission deadline for contributions for a special issue on Performance and VR Practice from The International Journal of Performance Arts and Digital Media has now been extended to March 1st 2018. http://explore.tandfonline.com/cfp/ah/rpdm-performance-and-vr-practice Details are below, but if you need any further information, don’t hesitate to get in touch. Best wishes, Sophy Sophy Smith Professor of Creative Technologies Practice Institute of Creative Technologies 3.05 Queens Building DeMontfort University Leicester Skype sophy_smith E ssmith05@dmu.ac.uk Twitter @sophysmith Virtual Reality technologies have a long and established history. As Oliver Grau recognizes in his seminal text Virtual Art: From Illusion to Immersion (2003), “the idea of installing an observer in a hermetically closed-off image space of illusion did not make its first appearance with the technical invention of computerised virtual realities. On the contrary, VR forms part of the core of the relationship of humans to images” (Grau, 2003: 4-5). Such is our fascination with creating “illusionary spaces” (ibid.), it is understandable that artists and technologist have spent the last few decades exploring how technologies, such as VR, can enable us to extend beyond our own reality towards immersive and illusionary theatrical experiences. Since the 1980’s, when VR was first used in a performative context, beyond its application in industry, artists and scholars have continued to challenge notions of what is ‘real’ and what is ‘virtual’; they have challenged concepts of transcendence, simulation, immersion, materiality, alternate realities, hybrid or mixed realities to name but a few. The use of VR has therefore been important for opening up perspectives and for developing new performance paradigms. Yet, whilst the use of VR over the last three decades has been focused and rigorous, it has not been as widely adopted as other technological tools (such as gesture/motion-sensing systems or live video and projection mapping systems) have been. This is largely due to practical concerns and the availability of such a complex technology. However, over the last few years, VR technologies have made a reemergence, not only in terms of affordability, but because the continued advances in design and usability are making it increasingly possible for artists to access and explore its potential. In 2017, Sony released the Play Station VR headset, enabling high quality VR technologies to be accessed at home. Google cardboard and other VR -goggles enable users to access VR content through their smartphone and 360 streaming is available on Youtube. In response to this, a greater number of performance practitioners have begun to explore how such VR technologies can be used. For instance, 2017 has a seen the premier of a number of new examples of VR performance work, some made by independent artists and others by established organisations including AoE’s Whist, Boleslavsky? and Júdoká’s Dust (supported by Rambert/V&A), Makropol & Bombina’s The Shared Individual and a new VR film by the English National Ballet, inspired by Akram Khan’s Giselle. As its use continues to increase, this special issue wishes to examine how, and in what ways, VR is continuing to have an impact on current performance works. For example, some artists are using VR technologies to reimagine existing performance work, others to offer new perspectives on performance making, and others who are exploring new relationships with their audiences. This raises a number of interesting and timely questions relating to the impact and influence of VR technologies on creative processes and the nature of the work made – In what ways are current VR technologies helping artists to re-imagine their practice? What new work is being created and is this having an impact on professional performance practice? In what ways have current VR technologies and practices extended concepts such as, transcendence, simulation, immersion, materiality, alternate realities etc? How might the use of VR technologies open up new models and/or possibilities for collaboration between artists and technologists? What new performance environments are being created within VR and how might this change how audiences access and engage with professional performance? How can VR enable audiences to engage with performance work in new ways, both collectively and individually? What can VR offer professional performance practice that a traditional ‘live’ experience cannot? What can we learn from emerging VR practice across other sectors to inform and extend professional performance practice as a whole? We invite full essays of between 5,000 and 8,000 words or artistic position papers of between 2,000 and 3,000 words. We would particularly welcome practice-as-research contributions that experiment with content and form, while maintaining a rigorous enquiry into their disciplinary frameworks. Contributions might consider (but are not limited to) the following topics: • New paradigms of performance offered by VR • Live 360 streaming • Choreographing/directing for VR • VR and the collective experience of performance • Role of the audience/participant in VR performance • Participant experience • Notions of performance • Constructions of narrative • Ethics of VR Performance • VR and theatre design Essays should be formatted according to the Routledge journal style. Submission Information For detailed information on how to submit, visit our ‘Instructions for Authors’ page. DEADLINE: 1st March 2018 Full manuscripts should be submitted online: http://www.edmgr.com/rpdm/default.aspx Publication: Autumn 2018 in Volume 14, Issue 2 Please contact Sophy Smith at <ssmith05@dmu.ac.uk> and/or Kerry Francksen at <kerryfk1@hotmail.co.uk> if you have any queries. Guest Editors: Prof. Sophy Smith and Dr Kerry Francksen, Directors of DAPPER (Digital Arts Performance Practice – Emerging Research), De Montfort University.