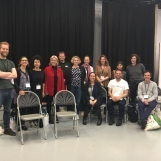 The language of ‘outreach’ shapes conversation on university and artistic life, from ‘strategic visions’ to arts council applications. But what does it mean to reach out? What is the discourse on outreach as a gesture – an act and effect?

In this day-long workshop, the TaPRA Theatre, Performance and Philosophy working group aims to think together about gesture, site, institutional politics and the labour of reaching. We will ask: what does it mean to imagine a cultural sphere from which reaching takes place? How are we implicated in cultivating intellectual and creative spaces and ties that fail again and again to bind, to shift – to query the form of these structures of ‘outreach’? If public impact is meant to ‘change’ those with whom our work comes into contact, how do we analyse and eventually reclaim the dramaturgy of this encounter?

Situated in the newly built Queen Elizabeth Olympic Park, an area of urban ‘regeneration’ that has become a cultural hub for major dance companies, start-up cafés and more, the workshop endeavours to reimagine and rearticulate the cultural economies and landscape ecologies that inform our intellectual and artistic practices, querying how political/policy environments shape the way we think and make our work ‘public’. The workshop aims to lay groundwork for further manifestations of these institutional choreopolitics – welcome to all.

The workshop is free for students, independent practitioners and unaffiliated academics. We kindly request participants on full salaries to contribute £10 towards catering costs.

All participants should be current members of the Theatre and Performance Research Association (TaPRA). You can register at a discounted rate for £10, either on the day or (preferably) here: http://tapra.org/join-tapra/ (“interim event only”).

Owen G. Parry is an artist and researcher working across performance cultures on subjects including trash, biopolitics, gay sex, fandom, fascism and Yoko Ono. The performance hangout is a mode of theatre which uses live fictioning, altered duration, non-productivity and “being together” as a means of interrogating the blurring of work and leisure under neoliberalism, the co-option of avant-garde tactics by the fascist right, and the corporate imperative “to participate”. It’s been developed for the four-hour performance fic.the.sky, commissioned by Fierce Festival, Birmingham 2017.

Johanna Linsley (University of Roehampton) is an artist, writer and researcher. She is a founding partner of UnionDocs, a centre for documentary arts in Brooklyn, NY, and a co-founder of the London-based live art domestic partnership, I’m With You. Her current research project “Acts of Assembly” (funded by Leverhulme Trust) examines the face-to-face meeting as a social genre.

Sivan Rubinstein is an Israeli choreographer and researcher based in London. Over the last two years, she has been researching and exploring migration and mapping through the forms of dance, visual arts and music. This became a system of movement that, like a language, moves through time and space. MAPS is a research and dance project which looks at the constantly changing nature of the world. It includes the audience-participation performance Active Maps.

Rita Marcalo is an independent artist whose socially-engaged choreographic practice brings different artists together, in different combinations, to realise different ideas. Her company, Instant Dissidence, invents ways of offering other people art experiences. Her latest project, One Last Dance, is a two-stage perambulating dance between Guildford (the first city Rita lived in when she arrived in the UK as an Erasmus student in 1994) and Cloughjordan (the rural Irish village where she is relocating post-Brexit).

Sofia Rodrigues Boito is a performer, playwright and researcher interested in artistic creation in a hybrid field. Sofia’s work unfolds in collective creations, including through theatre performances with adolescents. Born in São Paulo, Brazil, Sofia is a PhD candidate in performative writing (University of São Paulo) and is currently developing an artistic residence in Cité Interanationale des Arts, Paris.

Arabella Stanger (University of Sussex) is an academic whose interests reach across dance, theatre and performance, with an emphasis on the theoretical exploration of performance as social practice.

Nik Wakefield (University of Portsmouth) is a researcher, artist and writer working mostly in performance but also across dance, theatre and visual art. His research is concerned with theoretical issues of time and ecology in contemporary performance and art practices.